The Industrial Heritage of 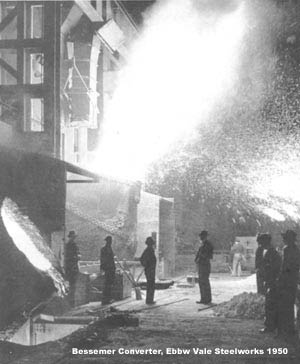 Prior to the Industrial Revolution

At the end of the 18th century, the population the Ebbw Fawr valley was only about 140.

The founding of the Ebbw Vale Ironworks in 1778 transformed the valley. In 1781, the furnace and ironworks employed around 70 workers. By 1815, the population of the valley had grown to 1200.

The second half of the century saw Ebbw Vale begin to take shape. 1853 saw the opening of the Literary and Scientific Institute. Christ Church was consecrated in 1869.

Conditions for workers in Ebbw Vale gradually improved, with the working day reduced to nine hours in the 1880s. Also the hated 'Truck Shops' were abolished in 1872. These were often over-priced company-owned shops which people were obliged to use, as the company would allow no other competition. Much of the credit for these improvements lies with the trade union movement, which was strong in the area.

Eugene Cross Park is the home of both the town's rugby and cricket clubs. However, cricket predates rugby and Ebbw Vale's first recorded match was played against Blaina in 1852. During the 19th century the influx of people from the surrounding counties looking for work in the local iron works and coal mines gave cricket a boost and in June 1879 "a meeting was held at the Institute to form a cricket club in the town". Support came from schoolmasters teaching the game as part of the curriculum and from the clergy who as disciples of Muscular Christianity believed that playing games helped to give order and moral structure to life within the tightly knit and drink ridden industrial communities.

The early games were played at 'Dobbs Field' named after the landlord of the nearby Bridgend Hotel. The Bridgend field as it became known was owned by Phillips and sons, Brewers, of Station Street, Newport, who by 1903 were charging £3.50 for a seasons rent. This amount was increased to £9 in 1904 and the following year to £10.

After the First World War in 1918, the Ebbw Vale Steel Company created a recreation club buying the Cricket Club assets for £100 but this organization ceased to exist on 31st March 1923 in the post war depression.  A Welfare Scheme for the town was then created and from this time the field was known as the Ebbw Vale Welfare Ground, however to honour Sir Eugene Cross, the influential and longstanding Chairman of the Trustees, the ground was given its present name in 1973.  With the closure of part of the steelworks in 1977 a public trust was formed in 1981 to succeed the Welfare Association and this led to Local Authority control in 1987.

The Ebbw Vale Forge schools had been built and managed by the Ebbw Vale Company, owners of the iron work and forges. They provided very bad accommodation.

An Education Act of 1870 enabled Elementary Schools to be set up throughout and by locally elected  Boards. Ebbw Vale had developed within the boundaries of four churches. So it's schools came under four different school boards-Aberystruth, Bedwellty, Llangattock and Llangynidir. The last two lay to  the North of the valley and were still  rural to a certain extent.

Aneurin Bevan was born in Tredegar, Monmouthshire on November 15, 1897. Although not a native Ebbw Valian, he served as the town's MP from 1929 until his death in 1960. The son of a miner, he went down the pit himself at the age of 13 and overcome a severe stammer to become chairman of his local lodge of the South Wales Miners Federation, local Councillor, and eventually a prominent Government Minister.

The Decline of Steel

Steel production in Ebbw Vale was phased out by 1974, with production transferred to Llanwern, in . This was done without large-scale redundancies.

Corus at the start of 2001 closed the final bastion of the industry, to which the people here have depended so much upon. Even so the town is still an important area for the eastern valley communities and is still the main Shopping centre. The recent Garden festival site has been redeveloped into a very picturesque out-of-town shopping centre.

The world's first steel rail was rolled at Ebbw Vale in 1857.

The rails for the to railway were made at Ebbw Vale.